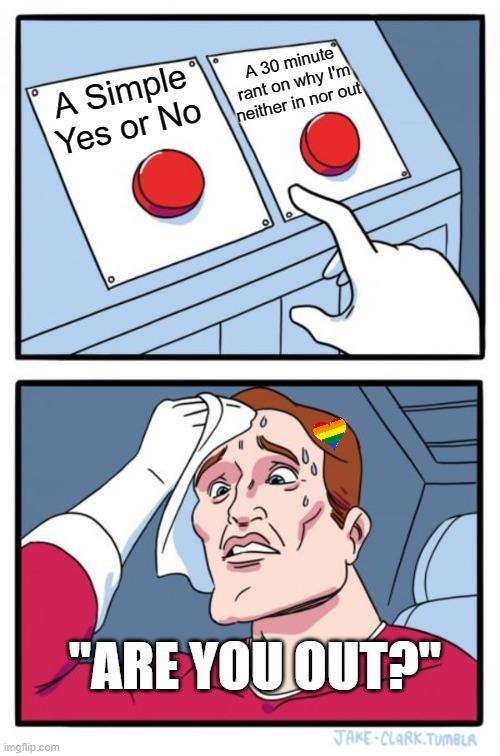 Nothing is better than this meme at capturing my response to a deceptively simple question – are you out (of the closet)?

It is deceptive because the metaphor of “coming out” consists of a very straightforward binary. You are either hiding in the closet — somewhat dark, cramped and depressed — or you have bravely stepped out of it, enjoying solidarity with the queer community and living as your most “authentic” self. I have no doubt that some people might resonate with this imagery. However, at least within my queer Asian circles, it is difficult to locate such a clear-cut “coming out” path.

The use of the umbrella metaphor of “coming out” – where it tends to generalise the relationships among queer people, their sexual or gender identities, and their surroundings – fails to do justice to the diverse experiences a queer person lives through. Some of us are only partially or selectively “out”; some of us are “out” about our sexualities but not our gender identities; and some of us are “out” with other people yet struggle to come to terms with ourselves. Drawing on my and some of my queer friends’ stories, I want to make a [clear] counterargument to the use of the “coming out of the closet” metaphor. By the end of this article, I hope that this article will spark thoughts about how shaking this metaphor off altogether might create a mroe inclusive queer space.

As a person who identifies as a pansexual, I have consistently failed to find my place on the binary of “in” and “out”.

My very first exploration of my sexuality was through discussing my crush on a straight girl with my roommate. In this sense, I was never “in the closet”. By the time I became certain that I was pansexual, I had already shared about my sexuality with other straight people. Yet, I have never been completely “out of the closet” either. Living abroad enables me to be active in local queer spaces while simultaneously maintaining a straight façade whenever I go back to my home in China. My rather conservative and homophobic dad would probably choke if he found out that his guai (?, obedient) daughter helped run queer spaces at university (and wrote articles for Queer Asian Project). In this way, I’m living a double, triple or even quadruple life – my mum vaguely knows while my dad has no idea; I’ve told most of my friends, but I’m ambiguous with acquaintances.

So, am I “out”? Do I have one leg in the “closet” with the other a step outside? The problem of the “coming out” metaphor is that it leaves too little space between either choice. The imagery of “coming out” dictates that one cannot be comfortably caught in the middle – the middle ground is always awkward and transitory.

The “in” and “out” binary also assumes that you only need to “come out” about one thing, presumably your sexuality. In this narrative, “coming out” is a singular, one-off process. But what about someone who is neither straight nor cisgender? This is the case for my friend SJ, who finds it difficult to disclose their non-binary identity even though they have been publicly queer for years. “‘Non-binary’ is not necessarily an accepted identity, so it’s very hard [to tell people about it]. Some of my friends, both gay and straight, still don’t know about that part of me,” said SJ. Even though SJ might be classified as “out” regarding their sexuality, their gender identity remains much less public. Their experience clearly defies the strict divide between “in” and “out”.

Moreover, for a non-binary person (and for many other queer people), the so-called “coming-out” is not an isolated act, but a process embedded in their everyday lives. SJ faces misgendering on a daily basis, and they must constantly decide whether to intervene: “People don’t usually ask about your pronouns. It’s annoying if you don’t step in. But it’s also hard to correct them when so many people don’t take non-binary identities seriously and don’t use they/them.” In SJ’s case, instead of having a single “closet” to “come out” of, they have to continuously navigate countless micro-decisions, every one of which has slightly different implications for how public their gender identity is. In a society that assumes them to be female upon first glance, and under a legal system where non-binary is not an option on the passport, SJ is repeatedly being forced back into the “closet”.

If I am in the ambiguous middle ground between “in” and “out”, then SJ is evidently beyond and above such a binary. The question, then, is whether we need to fit our life stories into the binary template of “coming out” at all. After all, if we have come to understand that gender, sex and sexuality are too diverse to be binary, can’t we say the same regarding how public one’s sexual orientations and gender identities are?

The “Closet” and the “Rainbowland”

The metaphor of the “closet” creates further problems by stigmatising queer people who keep  their identities private.

What pops up in your mind when you hear the word “closet”? For me, the “closet” sounds like no place for a happy, wholesome person. It is restrictive and suffocating, and those living in it deserve pity, not praise. The metaphor “closet” and its associations thus inevitably disgrace those who keep their queer identities private. I think it is about time for us to reject such stigmatisation. Here, I want to celebrate those surviving in the “closet”, just like we celebrate those surviving with a very public queer profile.

I do not intend to deny that there is much pain and sorrow when you cannot share a core part of your identity with those you love and care about. But I’d also like to highlight the courage, resilience and intelligence required for someone to keep part of their identity hidden, something that the “closet” metaphor denies. It is courageous because they have the mental willpower to live and maintain a double life; it is resilient because they hang on to their identities despite the difficulties created by their circumstances; and it is intelligent because of the sheer brain power required to keep up the façade of being straight. In my case, I need to carefully manage my social media profile, keep a mental note of whom I’ve told my sexuality to and whom I’ve not, and even make up lies on the spot when my parents become suspicious.

And yes, those in this position can still be happy. They can still laugh and play and chill and date, and they can still enjoy relationships even if they are not known by others. Of course, there are serious limitations, and we all dream of a future where queer people can shed their worries and keep no secrets. My point is that life in the so-called “closet” is not an indication of bleakness. This is why we should stop calling it the “closet” and use metaphors like “private” to disassociate our choices from negative connotations.

In direct opposition to the “closet”, there is another myth that portrays life after “coming out” as a rainbowland of freedom and solidarity. But this is merely a fantasy. For many people, being publicly queer is unsafe. The Asian parents that we always joke about are also likely to be homophobic. Disclosing one’s queerness to them is especially risky for those who are financially dependent on their parents, and, in a more general sense, for anyone who doesn’t want to be kicked out. This explains why, when I asked SJ if they would ever tell their parents about their queer identity, the answer was brisk: “Maybe, if I want to cut myself off from my family.” In the most extreme cases, queer people, especially transgender women, become targets of violence.

And being publicly queer can be an isolating experience. This is what my friend Ken realised when he first told his family and friends that he was gay. In his expectation, “there will be a community waiting to welcome you, like open arms, ‘oh yeah brother, we’ve been waiting for you all this time.’” But his “coming out” did not directly lead him to a welcoming queer community. “I didn’t feel part of any community. That made me feel even more lonely. Cause you just announced to your friends that ‘I’m different from you, and yet I don’t have anyone else to share this with.’” For Ken, finding a comfortable space took years. The myth of the rainbowland turned out to be disillusioning.

By writing this piece, I do not wish to discourage anyone from being public about their queerness. On the contrary, I want all of us to be able to live and love proudly with no reservations. But before such time arrives, I hope removing the “closet” metaphor would help us to empower those unable or unwilling to make their identities public. It’s okay to keep your queerness private, partially or wholly – there needs to be no shame.

By Way of Conclusion

When I first started brainstorming for this article, I wanted to come up with an alternative metaphor to the binary “coming out”. I thought about creating a spectrum of “coming out”, or even an axis. But the more I talked to other queer people, the more I realised the inadequacy of any framework in capturing the diversity and complexity of their experiences.

So, instead of trying to shoehorn these queer stories into another rigid paradigm, I want to finish this article on an open note. Please indulge me to share one last story, a story that makes me wonder whether, by focusing exclusively on how public one’s queerness is, we have missed the bigger picture.

This is the story of Yen, who found it relatively easy to introduce her girlfriend to family and friends, yet struggles to come to terms with her own bisexuality: “Initially, I thought I was straight and I’m just making an exception for this girl… because I have internalised homophobia. Throughout the four years we dated, I kept thinking I’m a straight girl. It wasn’t until after we broke up that I realised I’m not just attracted to one girl.” It took her a long time to learn that it’s okay not to be straight, that the bisexual part of her is acceptable. As much as I dislike using the metaphor of “coming out”, Yen said something so captivating that I can’t resist quoting it here:

Indeed, we’ve all had our own “coming out”, an experience(s) so rich and unique that the simple metaphor of “coming out” cannot possibly encapsulate it. So next time, rather than asking “are you out”, why not try raising a more open-ended question? This is the question I want to leave with you: what are your stories?

Co-edited by Jian and Lyn

View all posts by QAP